You know the feeling, you walk into a pub, and as you survey the bar your heart sinks as you stare despondently at the taps, like a lost traveller whom has just crested a dune and sees nothing but dry, sunbaked desert up to the horizon.  Tap 1 is inevitably (insert macro) Draught, tap 2 usually has the word Blonde in the name, tap 3 is inexplicably the same beer as tap 1 and tap 4, depending on how classy the place thinks it is, will be some euro-swill like Stella, or V f***ing B.  Occasionally you may be lucky enough to find an oasis, where noble Coopers may be served or, everybody’s favourite plan B, Little Creatures, but the desert is a harsh place and you will be disappointed more often than not.

osueHousehhhhjkxncvljsdnvljsndfNow, everyone knows the big guns, like the Local Tap Houses and Slow Beers of the world, and if you need info about them then have a look over at the rather excellent Crafty Pint.  But you are not always going to be within easy reach of one of these beer-centric establishments so the idea here is to cover some of the other bars and bottle shops whom have rallied to the call and are beginning to support good beer.  My fondest dream (other than those power fantasies where I control world’s nuclear arsenals with my mobile) is that one day every decent pub will have at least one tap devoted to a beer from the nearest micro and restaurants will put as much effort into their beer selection as they do the wine list.  The more support places which do offer a decent selection of beers get then the closer this glorious day will come to pass.

Sadly, as I’m yet to perfect my teleporter (I still can’t find the cat) I will mostly cover areas in my immediate surrounds, namely, inner Melbourne and, from time to time, Sydney and Hobart.  If you live elsewhere or know of somewhere worthy let us know, or even better, make your own goddam blog. It ain't exactly hard, I reckon even Bob Katter could manage it and he's clearly a few seats short of an Upper House.  Gotta give credit where it's due though, the man looks like he'd rather enjoy a good beer over some poncy, city folk shiraz.

I gotta go to the fridge...

Beer of the Week

IBA's are thick in the air like bullets in Baghdad these days, every man and his goat appear to be brewing one.  Which is no bad thing, it is a really nice style and the looks you get from your lager drinking mates as you down a few glasses are priceless, although the rounds of Guinness they now keep buying for me are starting to get old.  I’m sure they’ll be plenty more of this style to come too, at least until Feral or Murrays up the stakes with a black Witbier or something equally mental.

Anyhow, Otway Estate needs no introduction with their cohort of very worthy beers including a particular favourite of mine, the Blueberry Hefeweizen and the charming Red Ale, which, if heated a little and served in cup with some sugar would make a lovely substitute for a warm cuppa (serious, try it, tastes just like that Yorkshire Gold they sell at David Jones).
This limited batch, released alongside a more traditional IPA, the Raconteur, is in my opinion the best thing they’ve ever done.  A ferocious animal, the Black Panther IBA is a dark as its namesake and pours with an impressive cream coloured head.  The aroma is pretty big and fruity but with a roasted, earthy quality to back it up.
The best way to describe this beer is to say that it has presence it is not one of those beers you finish and then instantly forget.   The taste starts friendly enough with a citrusy, mandarin peel flavour on the approach which quickly transitions to an utterly majestic earthy hop bitterness only accentuated by an intense roasted finish with hints of nut and coffee.  It is difficult to state how earthy this beer tastes, almost like a bag of potting mix; I reckon you could grow a small shrub in it.  Despite this it never comes across as being unbalanced or a one dimensional.
This is a really decent example of the style and is well worth seeking out.  The first sip or two might be a little strained but i guarantee this dry, earthy, roasted taste will grow on you.  I tried it out of the bottle but it’ll be the first thing I order next time I’m at the Taphouse.
Posted by Rorz at 12:33 No comments:

The Craft of Beer 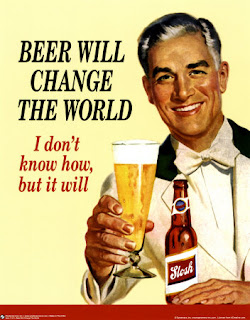 I love beer like Charlie Sheen loves cocaine and making bad life choices.  I love beer like Tiger Woods loves shafts, balls and holes.  Had I been at the wedding at Canaan I would have given Jesus a stern talking to about his beverage of choice, which would undoubtedly have made the next 2000 years worth of church going far more enjoyable.  Had I met Muhammad it would now be against Islamic Law not to drink alcohol and had I met the Buddha?  Actually I once did, he manifested himself to me as a bottle of Moo Brew Pale Ale.  Instant enlightenment!
Now I swear I’m not an alcoholic and, far from offending the members of 3 of this world’s largest religions, this blog serves as the physical extension of the love I have for beer and, in particular, Australian beer.  If by that you think I mean the like of Carlton Draught or (shudder) Fosters then you’d be mistaken, I said I liked Australian Beer, if I wanted piss I’d head to the bathroom.
You see, in this country at least we have endured a long dark age where the majority of beer made and drunk was bland, white bread lager.  Sure, it came in different coloured cans but in reality the stuff all tasted the same, it did its job well enough on a hot summer’s day but it was a pretty one dimensional beverage, the taste was just not why people drank beer, it was all about the experience.  Hell, the only reason I started drinking beer at 18 (or thereabouts...) was because it was an affordable way to get utterly shit-faced and if you didn’t, then you just plain did not fit in...
Because of this image, beer has a gotten a pretty bad rap over the years, whenever one mentions the dangers of alcohol and binge drinking it is always beer which is used to illustrate the point, despite the fact it has far less alcohol strength than most other forms of alcohol.  So while wine and spirits now have some exalted cultural significance, beer is scapegoat tarnished with the image of over indulgence, a negative but tolerated vice of the masses.
Luckily, things are beginning to change with the rise of craft beer, the actual meaning of which is still being hotly debated but what I describe as simply being beer brewed with thought and qualities of complexity and flavour.  Trying a good craft beer after a lifetime of macro lager is like turning on a light in a darkened room, an epiphany if you allow me to be so dramatic.  With over a hundred micro breweries across the country and more opening all the time and with pubs and bottle shops appearing which cater directly to beer lovers the it has never been a better time to be drinking beer.
If you want quality information and news then you’ll probably want to go here, if you want reasoned opinion and researched facts then this here is your man and if you’re after weird Japanese tentacle monster porn then my sick friend, look no further than here (don’t lie, you considered it).  But if you don’t mind the fevered, hateful ranting of a drunken lunatic then pull up a stool good sir, for I have a thing or three to share with thee...
Posted by Rorz at 07:18 No comments: